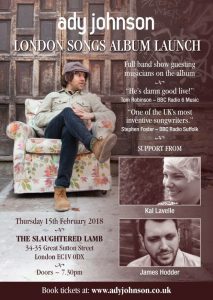 Ady has received both national and regional airplay. Songs Thank You for the Good Things and the single New Year’s Day were both chosen by Tom Robinson for his BBC 6 Music Mix Tape and aired on his show.

Ady will be joined on the night by his band and musicians who contributed to the album: Toby Bull ~ trumpet, sax & P-bone, Tom Briers ~ bass and sousaphone & Pete Flood (Bellowhead Oysterband) ~ drums. With guest musicians including David Rothon on pedal steel and Brendan McAuley.

“One of the UK’s most inventive songwriters.” Stephen Foster – BBC Radio Suffolk

“…kitchen-sink romanticism worthy of Ray Davies and a bluesy sound filtered through the uniquely English lens of skiffle.” 8/10 Americana UK

Kal Lavelle is an Irish born singer songwriter, now living in London. The Sunday Mirror have listed her as a ‘One to Watch’ and Ed Sheeran brought her on tour in both the UK & Ireland.

Kal Lavelle’s EP ‘Shivers’ went Top 5 in the iTunes ‘Singer Songwriter’ Chart, and the single was named iTunes ‘Single Of The Week’ in the UK (downloaded more than 60,000 times!). Additionally, she entered the Top 10 singer songwriter charts in Japan, Netherlands and Belgium.

Kal’s track the ‘The Ocean’ features on the UK playlist of Pret A Manger, the song also features on Perez Hilton’s POP UP #2 Album (released in the USA & Canada). Perez describes her music as “Exquisitely beautiful & raw”. Watch out for her new album, which is due for release in 2018.

“I recently recorded an ‘Under The Apple Tree’ session with Kal and she was lovely – warm, engaging and totally dedicated to her music. Buy her CD’s and/or see her live. Either way, get her music into your life!” – Bob Harris (BBC 2 / WBBC)

James Hodder is South London based troubadour who fuses Folk and Americana influences with bittersweet lyrics and storytelling. His debut album ‘In The Beginning’ was released in September 2017 which was described by BBC Kent Folk as “songwriting at its best”. 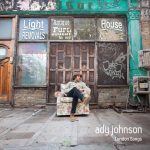